Premium Services For Selected Clients PLEASE SUBSCRIBE TO OUR NEWSLETTER 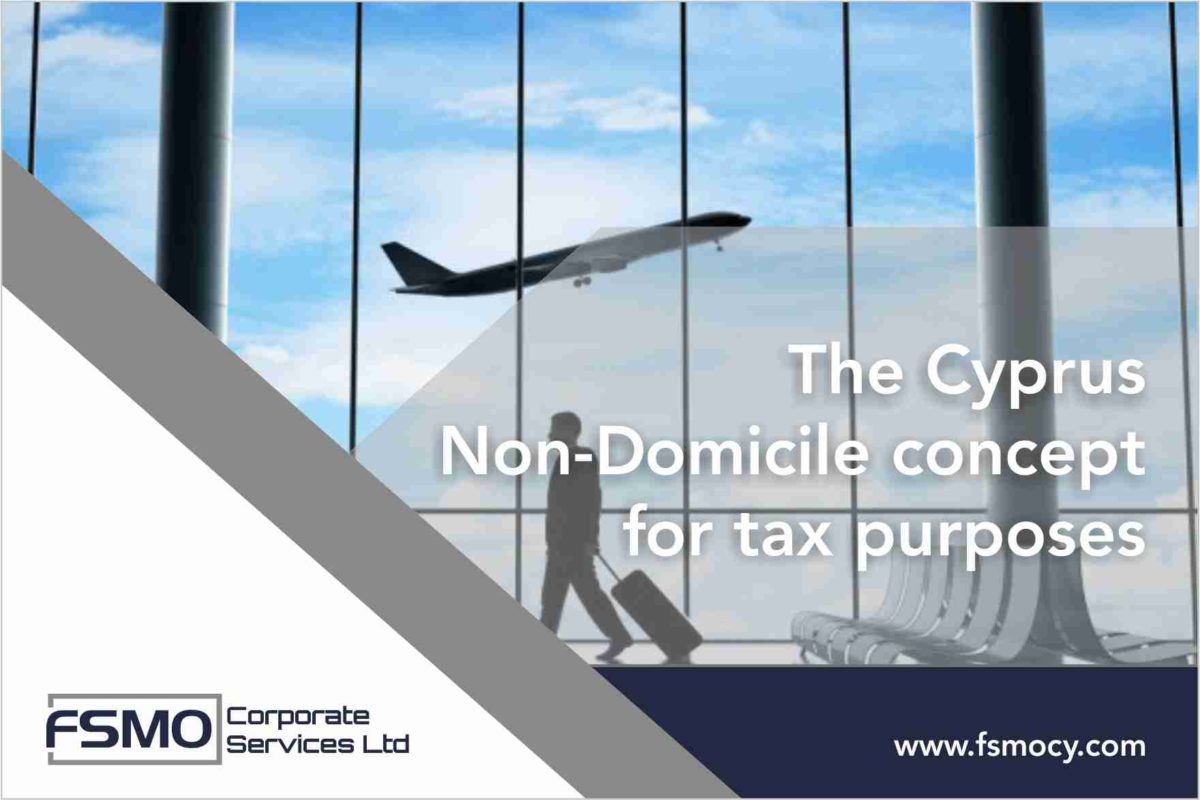 As part of the overall effort to continuously improve and simplify the Cyprus tax system as well as to remain a highly compliant and attractive jurisdiction, various new bills have been passed into new laws in July 2015.

Amongst these, there has been the introduction of the concept of Non-Domiciled individuals for tax purposes. The main aim of introducing the Non-Domicile concept is to constitute Cyprus as a prime choice of destination for persons (both EU and non-EU) wishing to move their personal tax residency in another country.

What does it mean?

Foreigners who decide to move their personal tax residency in Cyprus, will automatically be considered as non-domiciled in Cyprus for a maximum of 17 years.

For tax purposes, non-domicile persons who become Cyprus tax residents will now be completely exempt from Special Defence Contribution tax (“SDC”). SDC generally applies on dividends and interest. As SDC tax does not apply in the case of Cyprus tax resident individuals who are non-domiciled in Cyprus, dividend and interest earned by such persons will now be completely tax exempt in Cyprus. It is noted that the main income of high net worth individuals is generally dividends and interest. Furthermore, irrespective of domicility, foreigners becoming Cyprus tax residents enjoy an array of other significant tax advantages; with the main ones being outlined below.

Definition of Non-Domiciled persons In accordance with the provisions of the Wills and Succession Law, there are two kinds of domicile:

· domicile of origin; i.e. the domicile received at birth (generally dependent on the father side), or

· domicile of choice; i.e. domicile acquired by establishing physical presence in a particular place and by demonstrating sufficient intention to make it the place of permanent residence Irrespective of the domicile of origin or choice, individuals who have been tax resident in Cyprus for at least 17 out of the last 20 years prior to the tax year in question, will be deemed to be domiciled in Cyprus for the purposes of the SDC Law.

In the case of persons who have their domicile of origin in Cyprus, they will nevertheless be considered as non-domicile in the following cases:

· If they have acquired and maintain a domicile of choice outside Cyprus, provided that they were not tax residents in Cyprus for any continuous period of at least 20 consecutive years prior to the tax year in question; or

· If they were not tax resident in Cyprus for a period of at least 20 consecutive years immediately prior to the entry into force of the non-domicile provisions (i.e. between the years 1995 and 2014 inclusive).

As per the provisions of the Cyprus SDC Law, dividends and bank deposit interest earned by individuals who are tax resident in Cyprus are subject to SDC tax at the rate of 17% and 30% respectively, regardless of the source of the income (i.e. from Cyprus or from abroad).

SDC tax applies only for individuals who are both Cyprus tax resident and domiciled in Cyprus. Therefore, non-domiciled tax residents will have dividend and interest completely tax exempt in Cyprus.

Other Cyprus tax advantages for individuals

· Dividends and interest are exempt from Cyprus income tax and subject only to SDC in the case of domiciled tax residents.

· Profit from sale of shares and other qualifying titles is specifically exempt from Cyprus taxation, provided that the underlying assets do not include immovable property located in Cyprus.

· 50% exemption for remuneration from employment exercised in Cyprus by persons who were resident outside Cyprus before commencement of their employment. The exemption applies for 10 years commencing from the year of employment, if such income exceeds €100,000 per year.

· 100% exemption on remuneration for salaried services rendered outside Cyprus for more than 90 days in a tax year to a non-Cyprus resident employer. · In case of Cyprus immovable property acquired up to 31st December 2016, profit from subsequent future disposal of such property will be exempt from the 20% Capital Gains Tax.

· Pension received in respect of past employment outside Cyprus is taxed in Cyprus at the flat rate of 5% for amounts in excess of €3,420.

· No Capital Gains Tax on the sale of immovable property located outside Cyprus.

· No inheritance tax, no wealth tax, no gift taxation.

· In case of individuals who are beneficiaries to a Trust, such individuals would be exempt from tax in Cyprus, to the extent that the income at / from the Trust would be in the form of interest or dividends.

The tax benefits offered to non-domicile persons who choose to become Cyprus tax residents as well as the other mentioned Cyprus tax advantages provide ample room for tax planning. Such planning is strongly recommended to be performed prior to the foreign person becoming a Cyprus tax resident. In case of individuals who are directors or senior management in Cypriot entities, the relocation of such individuals to Cyprus could significantly enhance the much needed corporate business substance as it would reinforce its effective Cyprus management and control. Furthermore, each person who considers moving his personal tax residency to another country (in this case to Cyprus) should separately ensure that, depending on the laws and practices of his current tax jurisdiction, he shall stop being a tax resident in that other country. Anti-avoidance provisions In case where an individual domiciled in Cyprus transfers assets to an individual non-domiciled in Cyprus who is a relative up to the third degree, and the Commissioner considers that one of the main reasons for the transfer was to avoid the payment of defence tax, then the income arising from such assets will be subject to defence tax, which can be collected either from the transferor or from the transferee.

Let us suppose that Mr. George from the UK who is sole shareholder and employee in a Cypriot financial services company becomes Cyprus tax resident, non-dom.

Mr. George has 3 sources of income:

FSMO team will be glad to assist you with the applications and further guidance.

This content is for general information purposes only, and should not be used as a substitute for consultation with professional advisors. We believe that the information in this publication to be correct at the time of going to press, but we cannot accept any responsibility for any loss occasioned to any person as a result of any action or refraining from action as a result of any item herein. FSMO does not provide advice concerning the choice of investments for investors.